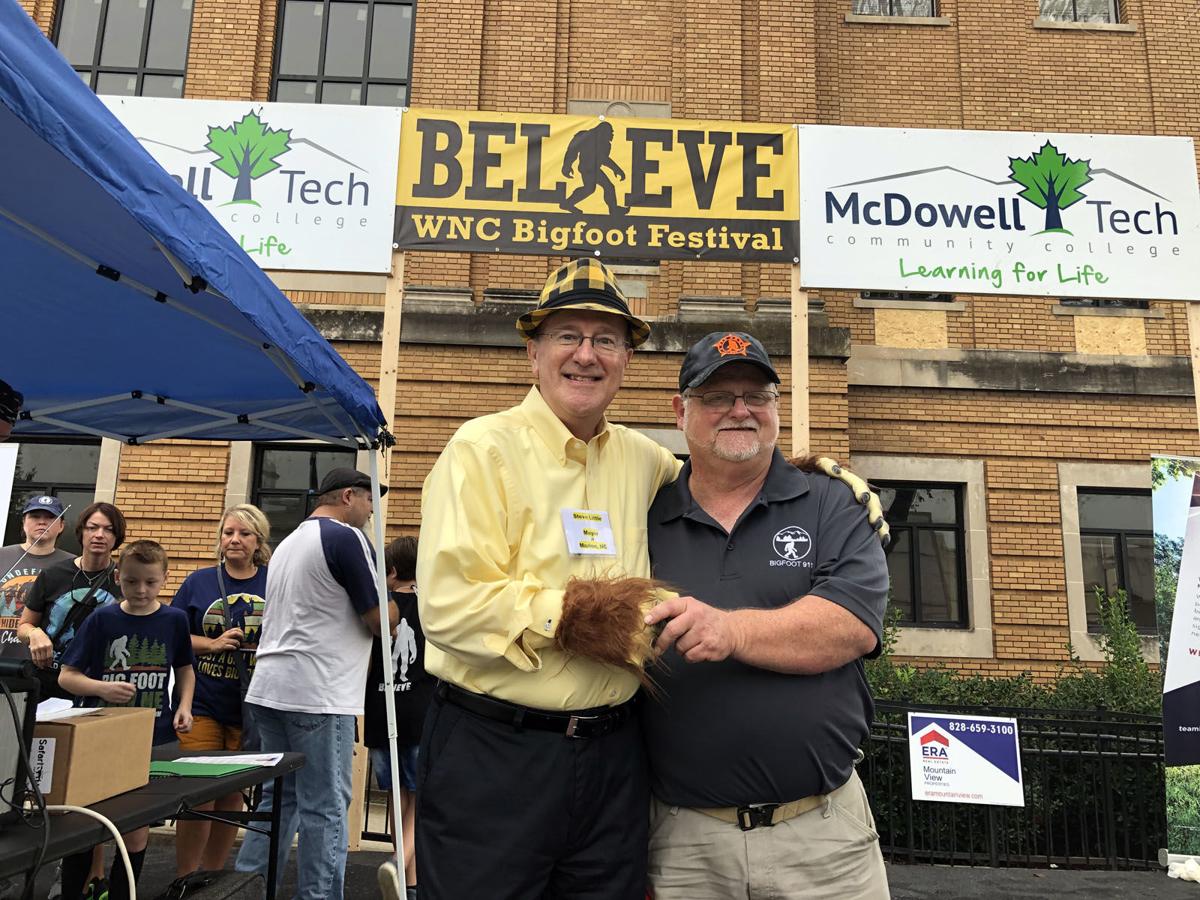 Mayor Steve Little and John Bruner of Bigfoot 911 both presided over the opening ceremonies at the second annual WNC Bigfoot Festival. 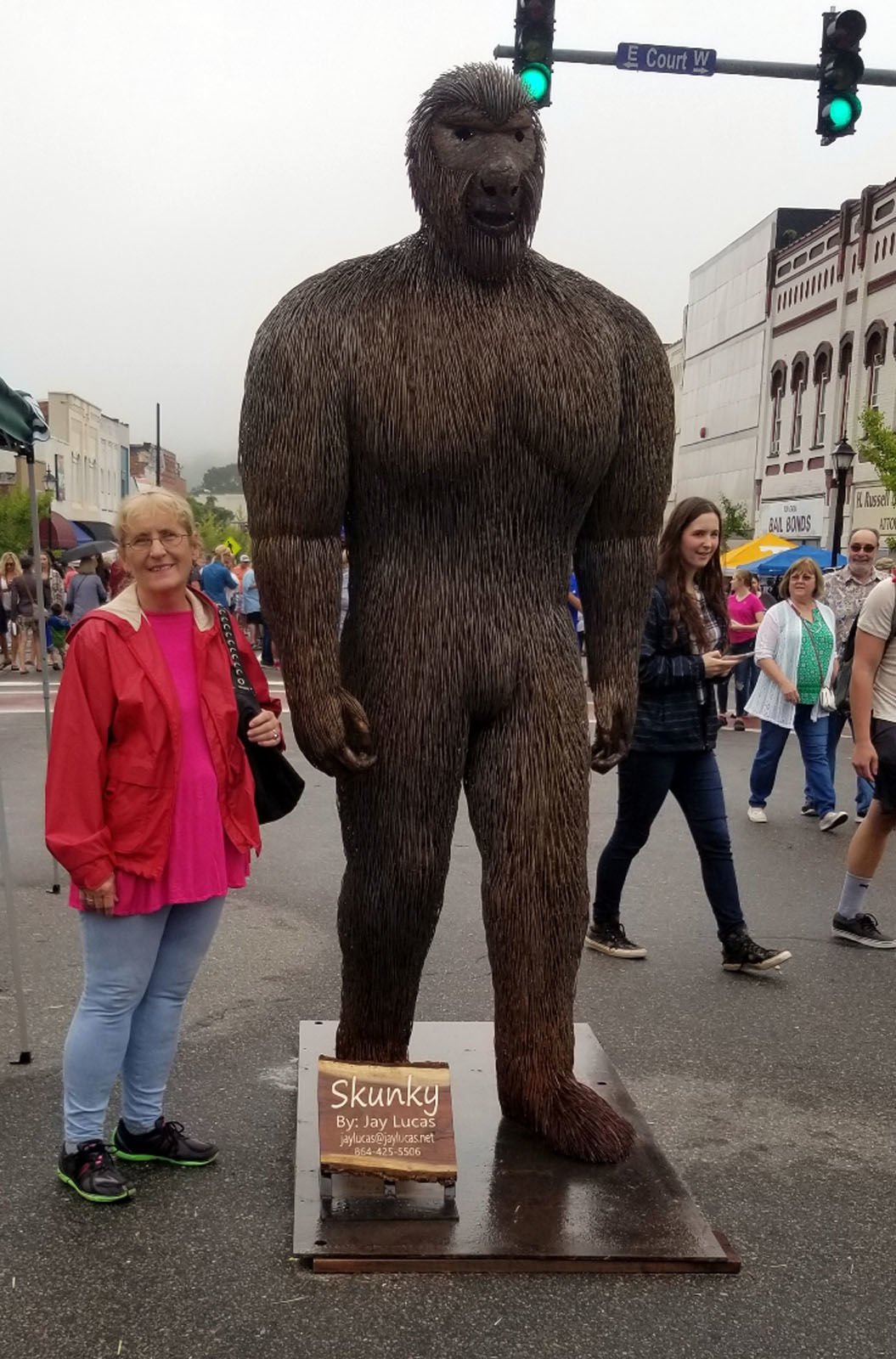 Lynda Bivens of Morganton stands next to the tall Sasquatch statue in the middle of the WNC Bigfoot Festival on Saturday. 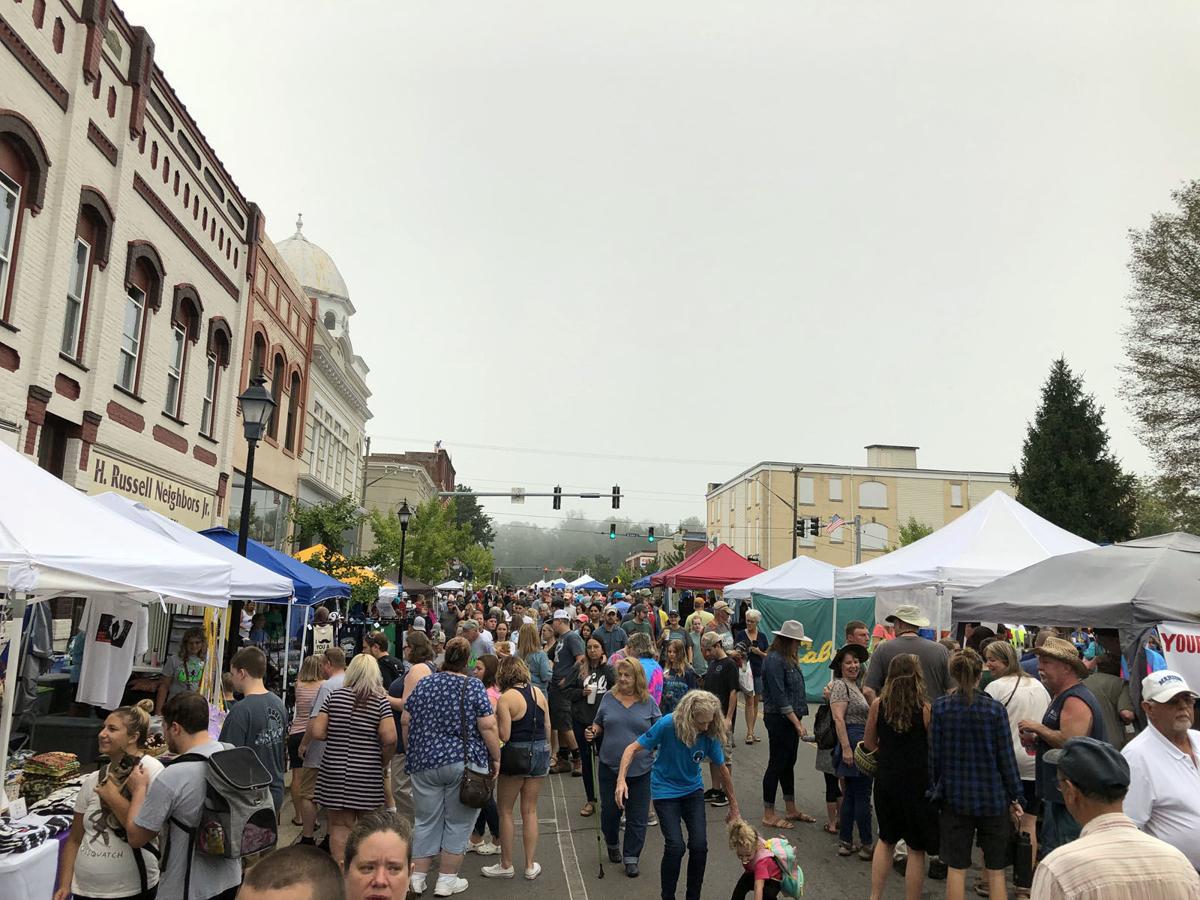 On Saturday, downtown Marion was again crowded with thousands of people who came to the second annual WNC Bigfoot Festival. According to all indications, it was another huge success for Marion and was bigger than the first one. John Bruner of Bigfoot 911 says he’s heard an estimate of 44,000 while City Manager Bob Boyette said he’s heard estimates of 40,000 to 50,000.

Mayor Steve Little and John Bruner of Bigfoot 911 both presided over the opening ceremonies at the second annual WNC Bigfoot Festival.

Lynda Bivens of Morganton stands next to the tall Sasquatch statue in the middle of the WNC Bigfoot Festival on Saturday.

On Saturday, downtown Marion was again crowded with thousands of people who came to the second annual WNC Bigfoot Festival. According to all indications, it was another huge success for Marion and was bigger than the first one. John Bruner of Bigfoot 911 says he’s heard an estimate of 44,000 while City Manager Bob Boyette said he’s heard estimates of 40,000 to 50,000.

On Saturday, downtown Marion was again crowded with thousands of people who came to the second annual WNC Bigfoot Festival. According to all indications, it was another huge success for Marion and was bigger than the first one.

“It was a totally successful day,” said John Bruner with Bigfoot 911.

Bruner said everything ran smoothly including the checking in of the 170 vendors.

“We had a lot of help from the volunteers,” he said to The McDowell News. “(The vendors) were so happy with how the festival was laid out.”

When asked how many people attended, Bruner said he’s heard an estimate of 44,000 but that is not the final number. That would make this year’s festival bigger than the first one.

Bruner said he met people at the festival who came from Vermont, Massachusetts, Georgia, Alabama, Louisiana, Michigan and even two men who flew here all the way from Italy.

“That is the only reason they came here was for the festival,” said Bruner of the two men from Italy.

“The city was thrilled with the second annual WNC Bigfoot Festival and thanks John Bruner and Bigfoot 911, city staff, the Marion Business Association, everyone who volunteered and many outside agencies for all their hard work in making the event a great success,” said City Manager Bob Boyette.

Boyette said this year’s Bigfoot festival was even larger than last year and was the biggest event in the history of Marion and McDowell County.

“I have heard estimates of 40,000 to 50,000 people in attendance,” he said to The McDowell News. “The higher estimates have come from people with no association with the festival or the city. We will be working with Bigfoot 911 and other agencies to plan next year’s WNC Bigfoot Festival and to grow the festival even more.”

Police Chief Allen Lawrence said he’s heard estimates of 35,000 to 50,000. His officers were able to monitor the event using video surveillance and a couple of drones flying overhead.

“We had several police officers at every block of the festival,” said Lawrence.

The city police had to help a few missing persons — three children and an adult with disabilities. All of them were reunited with their families.

One person, who had a concealed carry permit, was charged for having an accidental discharge of their firearm in the city limits. No one was hurt in the incident.

McDowell EMS assisted with reuniting those three children with their families and treated one patient suffering from a medical emergency, according to Emergency Management Director William Kehler.

“We have heard numerous very positive comments about the Bigfoot festival from downtown merchants, people who attended and the general public,” said Boyette. “Everyone seemed to have a great time. From what was observed and people have told us, the crowd was larger than last year. The festival was just as crowded as last year, but more spread out, with a separate food court and kids zone area. Merchants stated that the peak crowd lasted for many hours, much longer than last year. The Bigfoot festival definitely had a very positive economic impact for the city and county.”

Downtown entrepreneurs had positive comments about the festival and how it boosted their businesses.

“I thought it was great,” said Cody Andrews, co-owner of Mountain Marquee, to The McDowell News. “Wonderful turn out, happy crowds, happy business owners, huge success. The organizers did a phenomenal job.”

During the festival, Mountain Marquee hosted the showings of two documentaries about the alleged half-human, half-ape creature: “Paranormal Bigfoot” and “Big Fur.” The movie theater also partnered with the festival for an outdoor showing of “Harry and the Hendersons” on West Court Street Friday night. But due to the weather, the showing of this movie was moved to the Municipal Event Center.

“Other than that, I think they are doing great things,” he said.

Agustin Precoma of Artesana ice cream said it was “an amazing super family festival” and there was great support for local commerce on Saturday.

“We love Marion and her talent for building a better city for everyone,” he said to The McDowell News.

Doug Watson of Flavors on Main said it was a great day for Marion.

“John Bruner did a fantastic job planning it and the turnout was awesome,” he said to The McDowell News. “Our business had a great day and I think most others did as well.”

When asked if he would change anything, Watson said he’d love for this festival to become a two-day event with evening entertainment for the patrons.

Lynda Bivens and her friend Kimberley Hottle, both of Morganton, had been planning for several weeks to come to the festival. Even though there was some rain, it didn’t dampen their enjoyment. Bivens said the event had plenty of great food to chose from and all kinds of great T-shirts.

Bivens and she and her friend had a great time and will next year, even if it rains again next year. “Very nice and organized I thought,” she said to The McDowell News. “We had fun.”

However, there were two complaints voiced by people who came out on Saturday and these will be addressed in the planning for next year.

The first complaint concerned the owners of parking areas in the downtown charging $10 or $20 for people to park their vehicles. To the best of recent memory, that had never happened before at an event in downtown Marion.

“The city does not control what private property owners charge for parking at a festival or at any time,” said Boyette to The McDowell News. “I am sure that parking will definitely be a topic of discussion for the Festival Committee as they plan next year’s festival.”

The other complaint concerned the long wait times for the shuttles. Last year’s festival did not even have shuttles.

“We’re going to have to add more shuttles,” said Bruner. “Next year, there will have to be more buses running.”