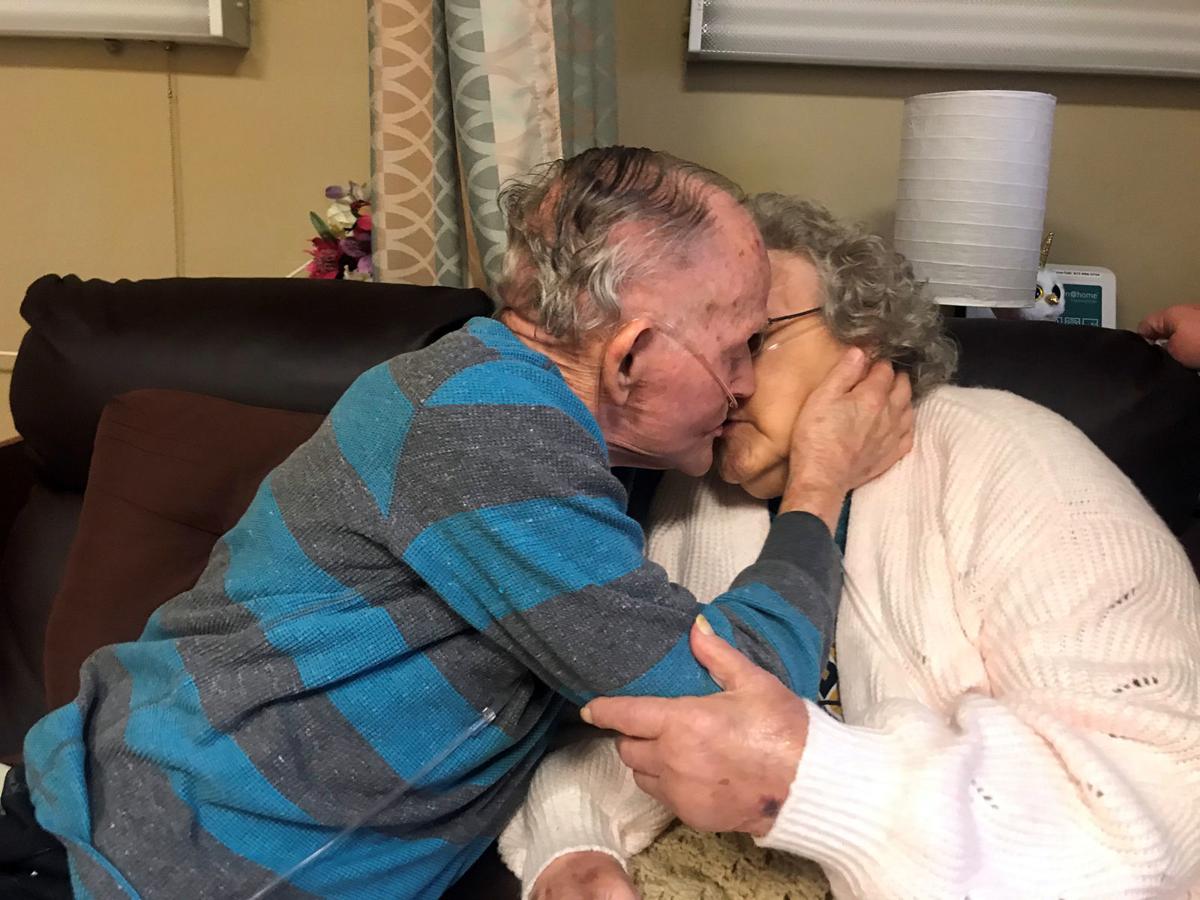 A smooch between Honey Bun and Sugar Booger - the Lonons' pet names for each other. The Marion couple has shared a lifetime of love and now share a room at Autumn Care of Marion. 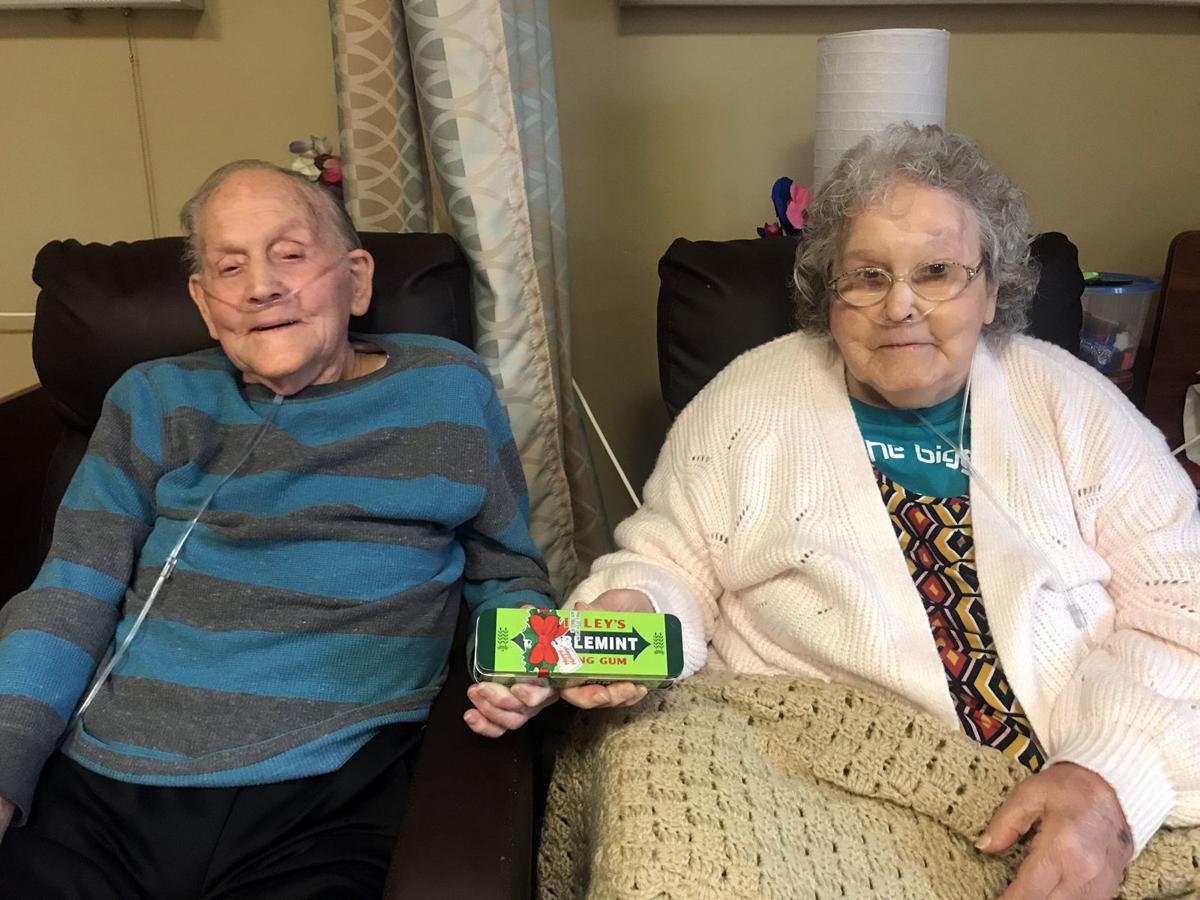 All because of a stick of gum - Calvin, Sr. and Helen Lonon met in Marion's Oasis Theater when Calvin offered Helen a piece of gum. The two lovebirds still love their Wrigley's gum and often share a stick in their Autumn Care room.

A smooch between Honey Bun and Sugar Booger - the Lonons' pet names for each other. The Marion couple has shared a lifetime of love and now share a room at Autumn Care of Marion.

All because of a stick of gum - Calvin, Sr. and Helen Lonon met in Marion's Oasis Theater when Calvin offered Helen a piece of gum. The two lovebirds still love their Wrigley's gum and often share a stick in their Autumn Care room.

A boy, a girl, and a stick of Wrigley’s spearmint gum. Calvin and Helen Lonon’s love story began more than 70 years ago when he passed a piece of gum to a girl he didn’t know. Together, they’ve unwrapped a lifetime of happiness and memories.

Although Calvin and Helen were on dates with different people that night in 1948 at Marion’s Oasis Theater, that single stick of gum sealed a relationship that has “stuck” through thick and thin.

“A friend that I was sitting with in the Oasis Theater looked back at him and said ‘Calvin, do you have any chewing gum?’ and Calvin said ‘yes’ and he handed me a piece,” recalled Helen. She says she knew she was in love “the minute I seen him.”

She didn’t talk a lot to Calvin that night, but she was smitten by his beautiful eyes. “Honey,” she said, “I feel in love just looking at his eyes. I didn’t have to say nothing. My heart said it.”

That evening, Helen told her mother she had met the man she was going to marry.

“She said ‘He may be married,’ but I said ‘Mama, my heart wouldn’t have done what it did if he was married.”

Fortunately, Calvin wasn’t married, and the rest is history. The two started dating and were married a year later, on Dec. 22, 1949.

Calvin is a native of Marion, but his wife was born in Mitchell County. “Her mother brought her down here and till the day she died, I always told her how much I appreciated her coming off that mountain, and bringing Helen,” said Calvin.

The Lonons parented four children, Calvin Jr, Richard, Danny and Vickie. Calvin spent his career serving the Lord, first as Assistant Pastor at Marion’s Faith Tabernacle, then as lead pastor at End Time Anointed Church, where he shepherded the congregation until he was 85 years old.

Today, Calvin, 93, and Helen, 87, share a room at Autumn Care Nursing Home. He calls her “Sugar Booger” and she refers to him as “Honey Bun.” The couple charms the staff daily with their love and devotion to each other.

They credit devotion to God and to each other, in that order, for their successful relationship.

“Always follow the holy vows you were united in and always be faithful to each other,” advises Calvin. “Put Jesus first, then your husband or your wife and you’ll pull together.”

“We may not have always saw everything the same way, but we worked it out between us,” he added. “No fussing and fighting. She prays for me and I pray for her.”

Visitors to the Lonons’ room will find it stocked with plenty of Wrigley’s gum, and likely as not, will leave chewing a piece.

“It will always be my favorite,” said Helen, gazing lovingly at her husband, “because it came out of his pocket.”

On The Level Mold and Repair Services

ON THE LEVEL MOLD & REPAIR SERVICES