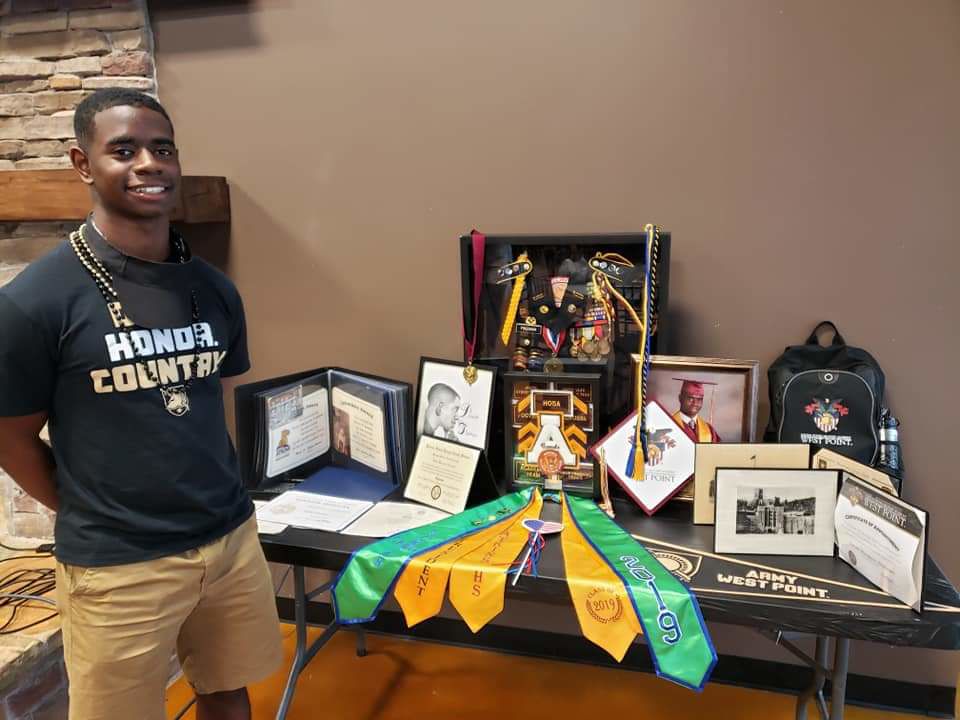 Two young men with roots in McDowell County are now preparing themselves to become cadets at the U.S. Military Academy at West Point, N.Y. Devin Freeman, son of McDowell native Macio Freeman, is now going through cadet basic training so he can join the “long gray line” at the USMA. In this photo, he is shown at his graduation party with his awards from high school. 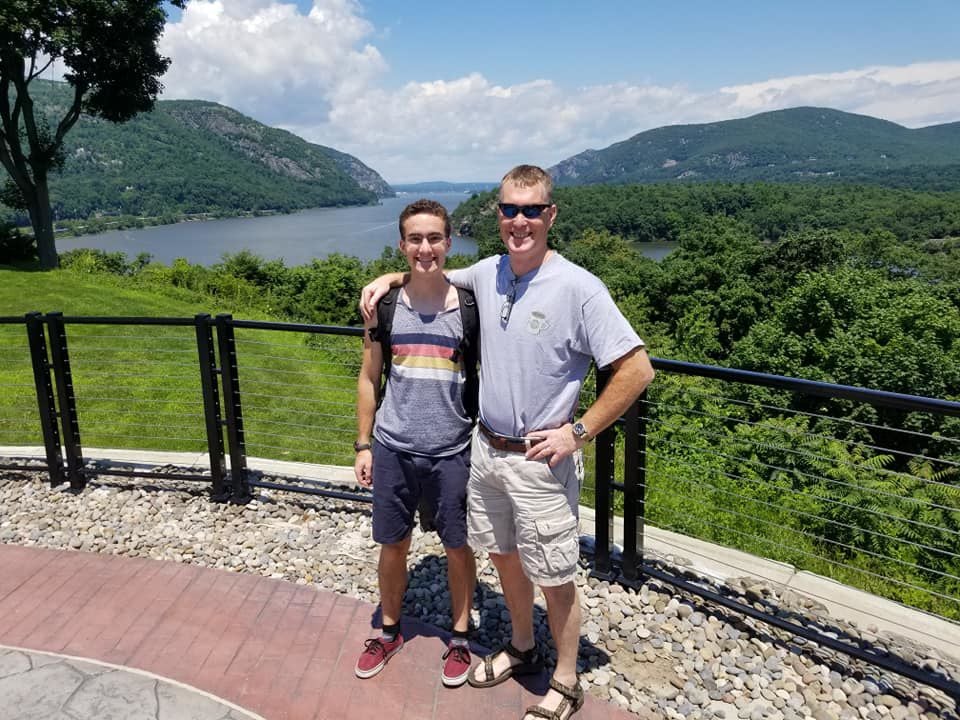 Likewise, Tristen Laney is also attending basic training and getting ready to become a cadet at the U.S. Military Academy at West Point, N.Y. He is the son of McDowell native Jeremy Laney and Alida Laney. In this photo, Tristen (left) stands with his father Jeremy at West Point with the Hudson River in the background.

Two young men with roots in McDowell County are now preparing themselves to become cadets at the U.S. Military Academy at West Point, N.Y. Devin Freeman, son of McDowell native Macio Freeman, is now going through cadet basic training so he can join the “long gray line” at the USMA. In this photo, he is shown at his graduation party with his awards from high school.

Likewise, Tristen Laney is also attending basic training and getting ready to become a cadet at the U.S. Military Academy at West Point, N.Y. He is the son of McDowell native Jeremy Laney and Alida Laney. In this photo, Tristen (left) stands with his father Jeremy at West Point with the Hudson River in the background.

Two young men with roots in McDowell County are now preparing themselves to become cadets at the U.S. Military Academy at West Point, N.Y.

At this time, Devin Freeman and Tristen Laney are both going through cadet basic training in preparation for the start of their education at the prestigious and exclusive academy at West Point. That means they are not available for interviews until their training ends on Aug. 17.

But their parents shared with The McDowell News the pride they feel about having sons who will soon become part of West Point’s “long gray line,” which for 200 years has produced two presidents and numerous famous generals in American history.

Devin Freeman is the son of Macio and Sherita Freeman and he has a younger brother Broderick. His father Macio Freeman grew up in the West Marion community where he learned the values he would later instill in his children. Macio graduated from McDowell High in 1989 and attended college and then went to work in the corporate business world in Philadelphia.

“Once I married and decided to have kids, the wife and I decided to move back closer to my family and home where my children could grow up in small-town USA and enjoy similar experiences and opportunities similar to what I had,” said Macio Freeman.

The Freeman family settled in Kernersville and Devin attended the Simon G. Atkins Academic & Technology High School in nearby Winston-Salem. This is considered one of the most academically accredited high schools in the state and also ranks well throughout the United States, said his father.

There, Devin excelled at both the academic and athletic levels. He was named class secretary, class vice president and eventually student body president with the Student Government Association. He won high awards in JROTC competition and received awards and honors for his performance in football and lacrosse. He was on the high school’s Honor Roll from 2015 through 2018. Devin was a 2018 graduate of both the U.S. Naval Academy’s Summer Leadership Experience and the American Legion Tar Heel Boys State 79th Session. He was an active member of his church, 4-H Club president, the YMCA Black Achievers, the Key Club, the National Society of High School Scholars, the National Honor Society and numerous others.

In January 2017, Devin asked his dad whether he should try to get an appointment to the U.S. Military Academy at West Point, which is highly competitive.

“I knew about the school and I knew how difficult it was to get into so I was taken aback at that moment, then I looked him in his eyes and said ‘Why not and why not you? Let’s go get it,’” said Macio Freeman to The McDowell News.

Devin Freeman was able to get a conditional letter of acceptance but he needed an appointment from either the vice president, a U.S. senator or a member of the U.S. House of Representatives. “This was the most challenging part of the process,” said Macio Freeman. “My son presented to them all a resume, strong test scores and his academic transcript that would dazzle any college admissions officer.”

The family never got a response from the office of Vice President Mike Pence and Devin was turned down for interviews by both U.S. senators from North Carolina, Thom Tillis and Richard Burr. However, he was granted an interview with U.S. Rep. Virginia Foxx of North Carolina’s 5th Congressional District and earned a nomination from Foxx. In December 2018, he was awarded an official appointment to the USMA.

As one of the most competitive schools, the average number of applicants is 15,000 with only 1,212 accepted each year. And the percentages of African-American students who apply and actually receive a nomination are extremely slim in comparison to their white counterparts, according to Macio Freeman.

The estimated cost for the average student to attend this school for four years is $400,000 but the tuition is paid by the U.S. Army.

Devin Freeman graduated from high school in Winston Salem on Friday, June 7. On Monday, July 1, he became a new cadet at West Point when he began his cadet basic training. It is a six-week training program where the new cadets become oriented to the needs and demands of the Army and the expectations of the academy.

“My wife and I are very proud of our son Devin and we are excited to see where his future will continue to lead him,” said Macio Freeman to The McDowell News. “I believe this story will be great to present to our McDowell County community of what young black men are doing outside of entertainment, sports and the sad stories of crime that have been committed. He is a testimony that our youth that are academically capable to go after America’s most competitive schools and be accepted based on their academic, extracurricular and community service attributes. They are doing it right here and not off somewhere else in America but right here in our backyard.”

Like Devin, Tristen Laney, 18, is also attending basic training and getting ready to become a cadet at the USMA at West Point, N.Y. He is the son of Jeremy and Alida Laney. Jeremy Laney was born and raised in Marion and is a 1990 graduate of McDowell High School. His family still lives on Nix Creek Road.

Jeremy Laney spent 21 years as an officer in the U.S. Navy specializing in nuclear engineering and became a military analyst based in California. Jeremy and Alida met in college and they have been married for 22 years. They have three sons and Tristen is the middle son.

His older brother is on a full Navy ROTC scholarship at Rensselaer Polytechnic Institute in Troy, N.Y. Both Tristen and his older brother are majoring in electrical engineering just like their father. The youngest son is about to start high school, according to Alida Laney.

She said Tristen and his brothers all have a great sense of service and are kind gentlemen.

Tristen went to high school in Monterey, Calif. at York School and like Devin excelled in his academics and athletics.

Tristen was captain of his cross country team and track and field team. He was also the lead bass vocalist in his school’s chamber choir. He interned at the Naval Postgraduate School in defense energy research and studied abroad in Spain. Even though he is young, he has traveled to 28 countries and was a lead best speaker at the Northern California chapter of Junior State of America. He attended the U.S. Military Academy’s Summer Leadership Experience. In his spare time, he is a guitar player, mountain biker and avid hiker, according to Alida Laney.

He also holds gold awards in the National Spanish Exams and a gold award in the National Latin 1 Exam. In May, his team placed first place in advanced placement statistics at the Monterey County Mathletics Competition with a $1,500 scholarship.

Due to his outstanding background, Tristen was accepted to Dartmouth College (an Ivy League school) and received appointments to both the U.S. Naval Academy in Annapolis, Md. and the USMA, according to Alida Laney.

“West Point was always his first choice and while we are a retired naval family we are so proud of our children serving their country,” said his mother.

“He received his appointments very early,” said Alida Laney. “From West Point, he received his letter of assurance six days after he submitted his application in September.”

He received his Naval Academy appointment in around October or November of last year while most students do not hear until the spring. He also received the West Point Summer Leaders Experience Oppenheimer Award for Physics and Nuclear Engineering, according to his mother.

His father Jeremy retired from the Navy in California but the family stayed in Monterey until the older boys finished high school. The Laneys now live in Virginia.

The McDowell News heard about these two young men entering the U.S. Military Academy because of Patrick Young, business and chorus teacher at McDowell High.

Young has been friends with Macio Freeman and Jeremy Laney since they were all children in school.

“Macio grew up around the corner from me, and Jeremy just a couple of miles away,” said Young to The McDowell News. “The two of them as the crow flies grew up less than 3 miles from each other.”

All three of them attended school together at West Marion Elementary, West McDowell Junior High and McDowell High.

“I would say that those two guys are probably my oldest friends,” said Young, adding their sons are wonderful young men.

KELLER'S STUMP GRINDING SERVICE NO JOB TOO BIG OR SMALL